The characters in FF3 are superb — I feel like I’m saying goodbye to dear friends.

Man, has this weekend been junk. I took a practice board exam to only be border line pass/fail again, had to create a research presentation on clinical education that I’ve put off for a month, and had to write a PICO (Patient Intervention Comparison Outcome) on the effects of cardio rehab on pulmonary function. At least I got to save the world while bawling my eyes to 16-bit characters; that really brought me back down to earth.

Something really has been lost in the sandbox era of RPGs — with open worlds and forge-your-own-path plots, no one needs to tell a good story anymore. The allure of Elder Scrolls and Fallout isn’t the characters, it’s that you can do whatever you want.

FF3/6’s back end is non-linear, but infuses each moment with meaning and significance through finding each of its 14 characters. The subtle discoveries and deeper understanding of the characters you play burgeon them from simple pixels into case studies of human nature. 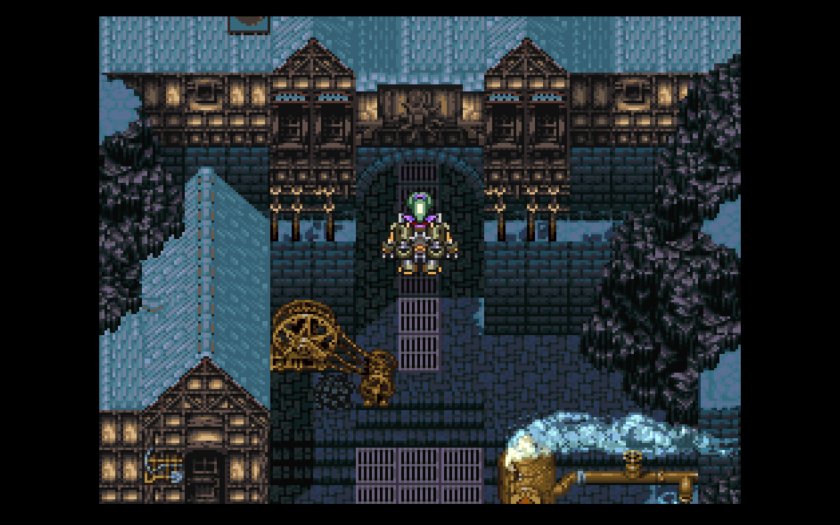 You approach the snowy town of Narshe with your band of three soldiers: two professionals and one mysterious girl. The town discovered an Esper in the mines, an ancient creature that is the source of magic. The Empire is currently oppressing other city-states using this magic to augment their army, so they eagerly send their troops to claim it.

Once contact is made, however, the Esper begins to communicate with the mysterious girl, kills the other two soldiers, and causes the girl to pass out. Upon waking up, the girl finds her self in the house of a Rebel leader who is fighting against the empire. The Empire locates her, wanting to reclaim the soldier they forged with magic, but she escapes out the back fleeing to the mines for safety.

This begins the story of how Terra, the mysterious soldier, begins to forge her life a new along with 13 other playable characters.

The gameplay is what you would expect from your standard RPG. You fight monsters to gain experience and win as long as your HP doesn’t hit 0. FF3/6 did some things that, looking back, were really neat: there were times where you had to control more than one party; you had an interplay of linear and choose your own adventure elements; for reasons unknown, a random octopus plays more than a minor role.

Where FF3 stands the test of time is its approach to characterization. The set up is always the same: use a cliche stereotype (womanizer, rouge, amnesic girl and etc.) to pull you in and then deconstructs them.

Take for instance SHADOW. He is a caricature of the stoic samurai/ninja and speaks very few words. When he does speak, it is usually to show is lack of empathy. He is a hardened assassin for hire that falls in and out of the party over the first half of the game making you wonder: what is his deal?

In a later scene, Shadow’s dog Interceptor becomes infatuated with another recruitable party member Realm – a 9 year-old artist. Shadow comments on how this is strange, given that Interceptor doesn’t like strangers. Then when Realm joins your party, she has an item that is only equippable by herself and Shadow – a Memento Ring of her mother who passed when she was an infant.

At no point during this does the game come out and tell you that Shadow is Realm’s father. On the contrary, FF3 is all about dropping hints and innuendo, making you put the pieces together.

Sleeping in certain inns and locations with Shadow in your party allows you further access to his memories and thoughts. Here, you get more of the back story that lead him to fathering Realm and leaving her as a young child. This all builds to a climax in the masterful 15 minute ending of the game where Shadow, now having helped save the world, decides to stay in the collapsing tower. Interceptor tries to stay with him, but he tells him to get out, backing himself into a corner and saying to himself: “It looks like I can finally stop running…”

The lonely defector who contemplates suicide. The over-sexed royalty that threw his future intentionally for his brother. The flamboyant treasure hunter hiding his insecurity of a previous failure. Throw in the 10 remaining plots, and there will be plenty to consider and explore.

Each character also comes with their own theme, and Nobuo Uematsu was at his prime when he composed these scores. The final 15 minute ending weaves all of them into one medley, a perfect send off for characters that were so purposely written. This music is still being reimagined today, with one of my favorite study youtube videos below.

I feel like there is a dearth of story-telling right now in our society. We live in the age of remakes with the most popular movies, television shows and music being simply reboots, copies, and reincarnations of earlier works.

Final Fantasy 3/6 is a reminder how good a well done story feels. Reminiscent of turning the last pages in a book, you get that same pit in your stomach knowing it is coming to an end. I’m going to miss these guys!