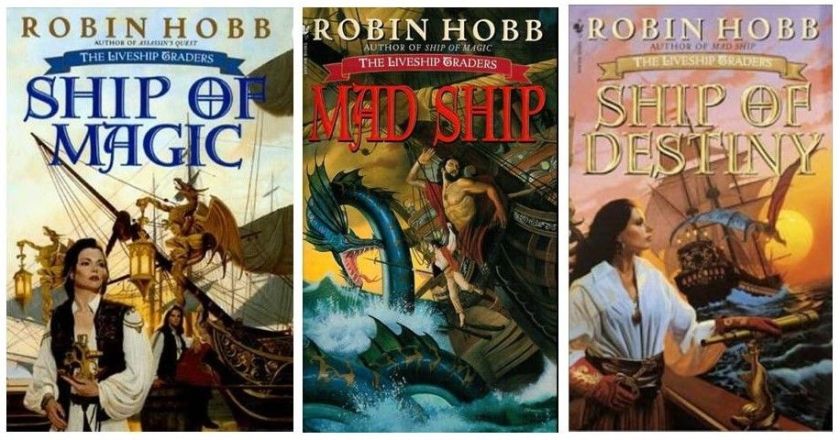 A Tale That Takes Too Long to Wind Up Unravels At The End.

It would have been easy to forgive Hobb for taking too long before she starts cooking. However, I can’t look past the ending she finally serves.

A common complaint of this Trilogy is the page count. Wherever you ultimately put the number of excess pages, a good chunk of the book is fluff, repetitive, and uninteresting. The first half of the Ship of Magic is a complete slog that is constantly adding new characters but never intertwining them. When she finally circled back around to someone, I had to read with intent to try and recall exactly who they were.

Things really pick up speed in the second half of the first novel, and we are treated to some of the most intricate characters from the Realm of Elderings Series. If you thought Fitz, the Fool, Patience, Verity, and Burrich were a hodgepodge of humanity in all of its complicated glory, the characters from The Liveship Traders trilogy ups the ante. These people are in complex situations and have unique emotional coloring. I became invested in them.

That’s why I don’t like the events in book three. The finale turns around one major event (a massive spoiler alert as I will be talking about it later) that eradicates the character building done hitherto. Afterwards, everyone decides to act like something they are completely not to tidely square everything away. It was a betrayal to the spirit of the characters Hobb gave such life to.

While the main protagonist is ostensibly Althea, a Bingtown Trader who lost her family Liveship The Vivacia to pirates, she really is the sideshow to the King of the Pirates — Kennit.

Kennit is a classic Robin Hobb character with multiple angles and layers. Kennit is a weird mixture of traits that is akin to a likeable psychopath — ruthless but also very charismatic. All of his actions are for his own narcissistic goals, but the byproduct is a more just society.

He originally interrupts the rampant slave trade to coax his fellow pirates into helping him capture a Liveship – a magical ship that has absorbed the memory of multiple generations from a sailor family. With these memories, the liveship becomes an animated figurehead capable of making quick decisions and speedy flights. Kennit wants to capture a Liveship to terrorize any and all to become the “King of the Pirates.”

After capturing multiple slaving ships, killing the crew, and releasing the captives, he begins to build an army of followers. Ex-slaves begin integrating into towns telling everyone of their savior, and Kennit becomes a venerated figure. Kennit continues freeing slaves, but it is hard to figure him out: is this all for ego or is there a part of his heart wanting to do good in the world?

This moral ambiguity around Kennit is very important. Wintrow, Althea’s brother who was in training to be a priest, is captured by Kennit and serves under him. Wintrow originally thinks of him as nothing but a vicious marauder, but after seeing all the goodness of Kennit’s actions, becomes one of his biggest and most vocal supporters, even in the ultimate showdown between Althea and Kennit over the Liveship.

This is where everything falls apart.

In a vicious turn of events, Kennit drugs Althea and rapes her. After seeing how Kennit was truly the villain of the story, no one could pretend that Kennit was just a “flawed” but ultimately alright guy.

Hobb goes on to make multiple missteps from this:

All the pending confrontations float away as people end up in predestined places, even if their ultimate roles make no sense. The ending is so neatly packaged because they are tidely swept into spots without any residue of conflict.

The ending has every character act out of character. I don’t know what to make of it.