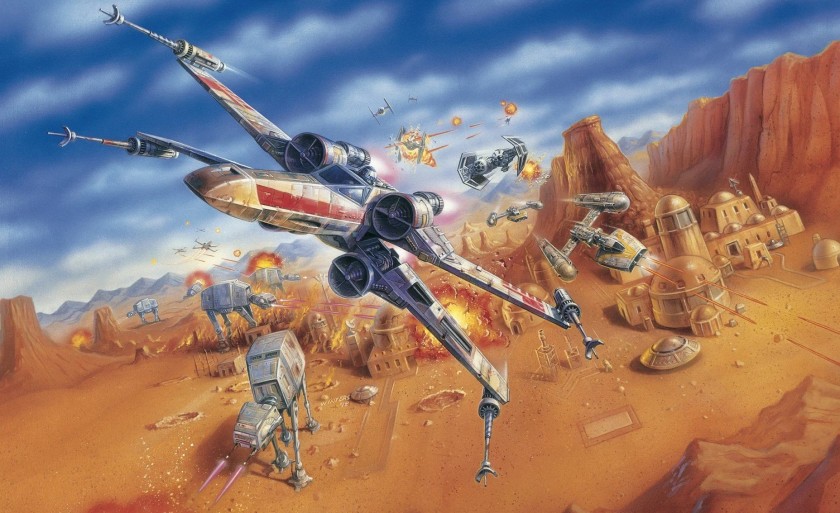 Also, I learned that I have been spelling rogue like the make-up rouge my entire life 💅🏻.

Sorry Grandma, but I fondly remember Rogue Squadron as the game I didn’t want to put down on Christmas day to come over to your prim and proper holiday affair. Why sit on uncomfortable, decadent furniture in an itchy sweater when I could be shooting down vagabond TIE fighters in the Star Wars universe? Life is too short.

The game is a promise fulfilled: Shadows of the Empire treated us to the open, gun and run format in its opening stage and then abandoned it for the rest of the game to its detriment. Rogue Squadron, however, stays with the concept for 16 levels adding depth with different mission objectives and aircrafts to use. It felt like we were finally getting the game we deserved…

…and it still is!

Rogue Squadron suffers from the typical things you would expect from late 90s gaming (clunky, lots of distance fog, unnecessary wait times) however it rises above the issues to give you classic fun.

Variety Is the Spice of Life.

The levels themselves are short affairs. I think the longest stage boasts a mission time of around 10 minutes. What makes them so fun to play is the variety found within.

The overall themes are either search and destroy or rescue. With search and destroy, you have particular targets that you have to find and eliminate. Rescue requires you to protect certain things, whether they be fellow starfighters, ground support, evacuating civilians, or buildings.

Rogue Squadron puts its thumb on the scale in different ways to keep things interesting.

In some missions, you will be required to leave what you are supposed to be protecting to accomplish an ancillary objective. It is a masterful way of ratcheting up the anxiety as you hustle to finish your side objectives to return to your main mission hoping there are still people to protect. In others, collateral damage is a consideration requiring you to not only eliminate the enemy but avoid harming friendly targets which can be extremely tricky, especially if they are placed side-by-side.

There are multiple ships that you can fly in Rogue Squadron, each with its strengths and weaknesses leading to strategic choices. Want lots of speed but sacrifice shields? The A-wing is for you. Need lots of defense to take a beating but okay with a loss of speed and firepower? The Y-wing was made for that.

I’m a sucker for hidden goodies that are locked behind performance standards. Rogue Squadron has an entire mechanic centered around this. For each level you are awarded from bronze to a gold medal depending on your shooting accuracy, time to complete, and amount of enemies eliminated. In the process of unlocking medals, you are rewarded with hidden levels, ships (like the Millennium Falcon), and goodies such as shield/missile/blaster upgrades.

Depth Worth Diving Into.

Star Wars: Rogue Squadron triggered another childhood memory — having tons of free time, I would challenge the game to bust apart at the seams. What would happen if I flew off into the invisible boundary upside down? Could an AT-AT be destroyed by blaster fire alone? Can I put the rogue in Rogue Squadron and kill my companions?

These games from the late 90s offer an odd cross-roads: they are not fully open but have many strange quirks that are exploitable. There is just something about this era that is engenders playful exploration that wasn’t necessarily its inent.

The game plays just the way you would expect a late 90s, 3D flight game to play: like molasses. Have you ever lost the power steering in your car as you struggle to rotate the wheel to make a slight turn? Sometimes flying in Rogue Squadron is just like that.

There is a particular sequence that is absolutely infuriating. In the later stages, TIE fighters will lock onto you and gun you down from behind. As you smash on the brakes to try and out maneuver them, you get embroiled in an odd dance of unsophisticated piloting. The computer will allow the TIE fight to always be out of reach, making sharp, precise turns as you see your enemy enter and exit your periphery to never be caught.

AT-AT cabling is its own nightmare. Switching from over the shoulder third person to no man’s land, you never get a good feel for the hitbox radius of the AT-ATs legs. This leads to you being bounced from its body either directly up or down with down leading to a rather dire consequence. There are ancient IGN text-only guides on this subject matter alone, giving you insight into to how problematic this part of the game is.

I fancy myself a retro gamer, but there are times where I realize that nostalgia is a helluva drug. Contemporary games may have their problems (micro transactions, patches after release), but when comparing quality of life between now and then, it is amazing some of the things we put up with.

While this isn’t a killer, Rogue Squadron has a lot of odd decisions that end up making you waste time that isn’t necessary. Whenever you run out of lives, you get kicked to an arcade high-score screen. Since the N64 predates internet connectivity, this list only includes people in your household and who the programmers artificially put in there.

Typically, this is used for motivation. However in Rogue Squadron, the person who holds the top tier doesn’t have an impressive score and could be reached in a day. While this should be harmless, the problem is when you are trying to replay stages to get better scores.

Every time you die, you are kicked out of your game and go to the high-score screen. From there, you have to go through the title screen, get back to your game, select the level, select the ship, and then proceed to playing again.

It is a frustrating time sink that exists for no reason. There is no easy way to restart missions when you see the writing on the wall. Given that replayability is a huge strength of the game, it is unfortunate its biggest downfall is the amount of wasted time it requires between retries.

A simple but fun arcade, run and gun that deserves some of your time.