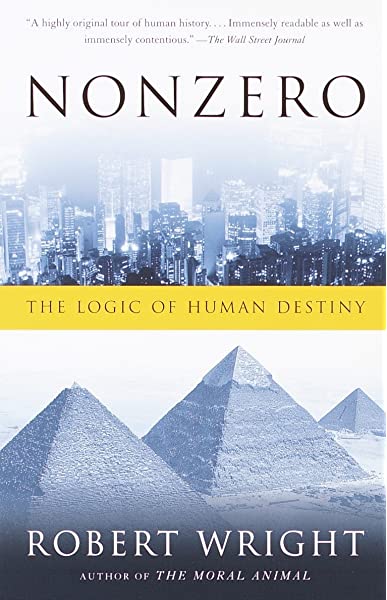 Wright Tries to Cram The Human Experience Into One Mathematical Principle.

And Guess What — That Doesn’t Work So Well.

While reading Steven Pinker’s The Better Nature of Our Angles, I started buying and shelving many of the books referenced through that tome of a novel (something I haven’t even finished yet. I’m not sure what’s worse: my back log of books or video games). Robert Wright has always been on my radar. I have seen his book The Evolution of God in the religious section of every online or in-person book store.

This book, a novel on game theory and cultural evolution, should be right up my alley. I’m actually a proponent of looking at something through an immensely narrow lense to exhaust everything to know about it on that specific level of analysis. Sure, it’s going to lead to some mistakes, simplifications, and over reaches, but the perspective and understanding gained usually outweighs that.

Somehow Wright has forgotten that his project is extremely narrow. I expected his take on human history to be parochial and myopic because he chose such a sliver of human existence. However, he doesn’t seem to be in on the joke. Just when you think he should start to pump the brakes, he hits the gas by dropping unsubstantiated claims as he marches to his inexorable forgone conclusion that Non-Zero Sum Games (aka: win-win situations) can explain all of human progress.

Nonzero is a novel on how the idea of win-win situations as defined by game theory shaped and guided cultural evolution. Human history was originally oriented around Zero-Sum interactions: there were clear winners and losers like in the instance of skirmishes between hunter gatherer societies. As humanity became more complex, culture became more amicable to situations where both parties could be victorious. Nonzero-Sum games is the rising tide that lifts all ships.

Wright’s thesis then posits that this cultural revolution is not only easily identified by its Nonzero quality but also by its inevitability: culture, like genes, are destined to become more complex.

The immediate point, to be made over the next thirteen chapters, is that if we leave morality aside and talk about the objectively observable features of social reality, the direction of history is unmistakable.

To best explain what I find so detestable about this book, I think it is best to discuss my problems with Game Theory itself.

Get Out of Jail Card.

In short, Game Theory is the study of how rational agents make decisions and their outcomes. A classic thought experiment in game theory is the prisoner dilemma.

Two prisoners, A and B, suspected of committing a robbery together, are isolated and urged to confess. Each is concerned only with getting the shortest possible prison sentence for himself; each must decide whether to confess without knowing his partner’s decision. Both prisoners, however, know the consequences of their decisions: (1) if both confess, both go to jail for five years; (2) if neither confesses, both go to jail for one year (for carrying concealed weapons); and (3) if one confesses while the other does not, the confessor goes free (for turning state’s evidence) and the silent one goes to jail for 20 years.

In this scenario, the most recommended outcome is that Prisoner A and B should both remain silent. This way they both serve the shortest term possible. Game Theory selects a very narrow slice of human existence, and then decides what the “best” outcome is.

However, let me add some contextual flair.

Let’s say Prisoner A has a rather overdeveloped conscious. Though he only served a year for his slight against mankind, remaining silent eats him up from the inside. He carries the weight of this crime with him past parole where he becomes addicted to drugs and alcohol. He ends up overdosing.

Prisoner B, however, is evil to the core. This is only one of his many offenses. After serving one year, he then learns to do more lucrative white-collar crime and steals the pension funds from hundreds of families. Once his ponzi scheme begins to unravel, he escapes to South America where he lives out on other people’s ruined retirement until he dies peacefully at his estate in his 80s.

While both of these vignettes are ridiculous, it has a demonstrable point: game theory is shit when actually collecting the human experience. If we narrow everything in life down to two choices in a 2 x 2 punnett square, you miss all the important stuff about being human. Your values, wants, and goals. Things don’t boil down to this binary t-chart we make for ourselves when deciding whether to go to the company Christmas party.

This same thing happens over and over again as Wright pontificates about human history through this narrow lense.

Is globalization a nonzero sum game? Well, it allows corporations to sell more goods and gives work opportunities to those in areas where they might not have access. On its face, this is the ultimate achievement of the Game Theory championed in Wright’s book (doesn’t the march of capitalism have such a nice sound?). However, it leaves out a ton of other stakeholders:

It doesn’t take very long before you start asking questions that aren’t encapsulated within game theory because it doesn’t involve many parties or many outcomes. If both parties cooperated and gained something, then it cancels out all of the noise.

Ten For Me, One For you.

Game Theory’s ultimate outcome, a “win-win,” is a very low bar for human achievement. That’s because it does not speak to how fair or just anything is. An owner taking 99% of the profit while sharing just 1% with the workers is viewed by Wright as a “Win-Win.” While he mentions that exploitation is a possibility, he champions that really we have it all wrong:

Scholars who stress only the exploitative side of chiefdoms underestimate the difficulty a chief faces in trying to get things done in a moneyless economy—the difficulty of being a one-man invisible hand…This is why leaders serve the public interest: not because they are public-spirited, but because neglecting the public welfare can diminish their own welfare.

It’s hard to take Wright’s pollyannaish view seriously. Not only are the people at the top not exploiting people, they have the best interests of the public at hand! At what point in human history as any one thought of their leaders, whether a Chiefdom, dictator, or democratically-elected official as pure as snow angels looking out solely for the common man. That’s not how the meat of politics is made.

I get the feeling that Robert Wright is doing something similar to what Jordan Peterson does when he discusses hierarchies: they exist because some are more competent and compassionate, not because of luck, bias, or preference. Peterson has the schtick about how an ape in charge who is mean gets taken down because it only takes a few other apes to wipe out its dictatorial leader. So of course there is no systemic racism or patriarchy — lead CEOs have their job because of merit otherwise entry-level employees would bludgeon them to death.

Have these people ever stepped outside their house? Ramit Sethi, a personal finance guy that I like, sent out a recent e-mail asking for users to fill out a survey about their job. Essentially this was the outcome:

60% of people thought of their job as toxic. Almost half didn’t get along with their team or supervisor. How do you fit this into the Nonzero lense? Obviously these people are all involved in a win-win if your only variables are money and owner worker. But once again, that 2 x 2 square does not capture all that being human is about.

Survival of the Fittest.

The other thing Wright does which was the last and ultimate sin was to essentially say if something existed, then it has utility as if there is a 1:1 correlation between the two. This form of survivorship bias is so blatant in portions of the book:

A premise of this book is that memes which manage to pass through this gauntlet of cultural selection, and come to characterize whole societies, often encourage non-zero-sum interaction…After all, a common reason that groups of people get emulated—families, clans, villages, baseball teams, corporations, sects, nations, whatever—is their productive and (relatively) harmonious interaction. So memes that bring productive harmony get admired and adopted…Still, the basic ideas proved robust over two millennia of manifest cultural fertility; societies that survived the frequent warfare of Polynesian life were societies that took mana and tapu seriously.

Here, Wright is discussing memes, the genetic equivalent of thoughts/ideas. To Wright, if a meme “survived” it most have offered some utility. This is exemplified in the Polynesian idea of mana and tapu — these are the societies that survived warfare, so since they survived warfare their ideas must have been important in doing so.

Your mana and tapu doesn’t help when a viral infection wipes out your village. Or how about that massive drought that killed all the crops and your family? Yes, ideas are important, but this survivorship bias doesn’t necessarily tell you which ideas are the best, just which ones survived a complicated lottery called LIFE.

Imagine a idyllic society that accepted gays, was not xenophobic, was egalitarian, boasted of high quality of life, and eradicated disease through science education. This is a society most would probably like to emulate. While all of these ideas are robust and useful, it doesn’t stop an asteroid form landing in the middle of town and wiping out the entire clan. I guess Wright would posit that violent chiefdoms did it better because you know it ain’t easy being on top and they made it through buddy!

It’s almost comical, and I didn’t even touch his near metaphysical devotion to game theory of a future utopian of win-win society.