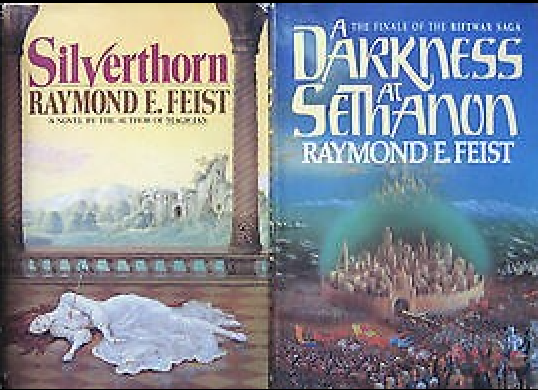 Much Better Than The Acclaimed Magician.

Feist finds his footing and ends his first trilogy (The Riftwar Saga) better than he started it.

I have a weird obsession with solitary focus once I start something. While my boyfriend can start and stop thirteen video games while juggling five book series between eight television shows, I tend to focus on just one thing per category. After reading Magician, I knew I was going to keep plowing forward. However, seeing that this series is thirty (30!!!11!) books, I decided to clear out the first trilogy before making any further commitment.

I guess I’m going to try and run the gamut. 😅

While Magician is good, I did have problems with some of the narrative devices/decisions. It never felt like the novel knew exactly what it wanted to be: it was uneven with its characters and randomly skipped time too much (One year had passed…).

Silverthorn & Darkness at Sethanon (DaS) are way more decisive. It immediately becomes an adventure against all odds and boasts the best character hitherto in the Riftwar Saga: Jimmy the Hand!

With Pug successfully closing the portal to Kelewan and Lyam coronated as king, the focus switches to normalizing life. Aruthra, now Prince of Krondor, is set to marry Anita. However, a band of assassins are released in the city to take Aruthra’s life. Thanks to Jimmy the Hand, a member of the thieves guild, the initial attempts are foiled. After burning their hideout to the ground, Aruthra continues with his ceremony. Jimmy foils another attempt on his life, but this time his wife Anita is the one hit with the poisonous Silverthorn.

Aruthra takes a band of men to infiltrate the north in hopes of finding a cure. Being foretold as a prophecy, Aruthra’s journey is not only about saving his wife but the entire kingdom against an ancient evil.

What I like most about Feist is how he doesn’t go for homeruns — his writing style is a safe and secure collection of single hits that builds up over the course of the trilogy. While this means I’m never floored with the “put the book down and re-evaluate your life” feeling, I’m never stricken with extreme disappointment or an eye roll of something that doesn’t land.

With Magician, Pug and Tomas are sold to us as THE main characters of the novel. However, Tomas floats off into no man’s land and Pug is in and out of the main story branch as the nobility of Crydee becomes more important. It left you a little flustered as the splintered story arcs don’t have a hierarchy.

In Silverthorne and DaS, this is mainly the story of Aruthra. Everyone is given their appropriate billing: page count reflects importance. The main story strongly tethers the other minor story arcs as it hums along.

It doesn’t hurt that these two books boast a better variety of characters. While Jimmy The Hand makes an appearance in Magician, he really comes into his own in these novels. A kid raised as a thief, he not only has a unique perspective but provides repeated comedic benefit. His schtick is that he gets in ridiculous situations that rely on quite wit and agility to solve and usually ends with a comedic riposte.

“How many can boast they saved the Prince of Krondor by goosing a demon?”

I Can Remember That.

Feist creates several scenarios that burn an image into your brain:

Beads of sweat rolled down the priest’s forehead and the cords on his neck stood out. Blisters rose on the creature’s ragged flesh and exposed muscle and it began an ululating cry. A sizzling sound and the smell of cooking meat filled the room. Thick oily smoke poured off its body, and one guard turned his head and vomited. Nathan’s eyes grew wide as he exerted the force of his will upon this creature. Slowly they swayed, the creature’s flesh cracking as it blackened and crisped from Nathan’s magic. The moredhel beat backwards under the force of the priest’s grip, and suddenly blue energy coursed over its blackening body. Nathan released his hold and the creature toppled sideways, flames erupting from its eyes, mouth, and ears. Soon flames engulfed the body and reduced it quickly to ashes, choking the room with a foul, greasy odour.

He also creates several locations that capture the imagination. Armengar is a highly buttressed fortress that sits on top of a naphtha (aka: explosive) mine. The fight between the invading army and Aruthra’s forces in the castle are peak imaginative experiences. You can feel the dust in the air as an invading army crushes itself against the ancient walls trying to infiltrate the defenses. The use of the explosives only adds flourishes to the experience as rock and enemies are torn asunder.

Feist isn’t afraid to get abstract, either. He sends Pug and Tomas into a celestial other world at one point where time and space have little meaning. Here, our heroes must combat ancient fiends who have set up traps that warp the very space-time continuum itself.

This Trilogy is worth the read, and I’m excited to continue the cannon.