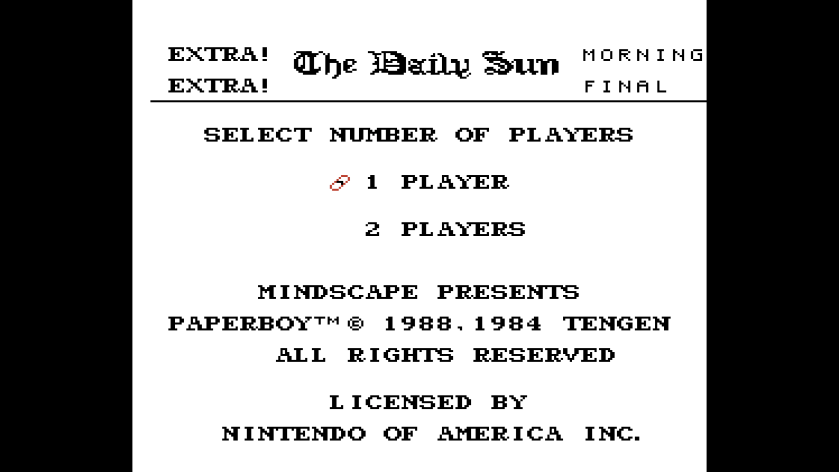 Relive a life of menial labor and marginal existence.

My first job paid $6.50 per hour. Little did I know that such a small commitment at 15 would lead to almost 10 years of disappointment. Be careful who you sell your soul to and be especially wary of people who use buzz phrases like “values-based leadership” or “no raises this year, but here’s a branded koozie cup!”

Paperboy was supposed to be like my first job where I didn’t expect much and could buy an Aristocrat handle by the end of the pay period. Those are some low expectations, but somehow Paperboy missed the mark: swigging bathtub vodka would be more entertaining than this game.

After all, It’s a game about delivering newspapers. What was going to be this developer’s next hit? A game about the person who screws on toothpaste caps?

A simple rags to riches story as we follow a young man’s supposedly first journey into capitalistic society. As he pulls himself up by his bootstraps each morning, he is faced with many adversaries: free roaming tires, traffic, storm drains, oddly placed fences, and a woman wielding a knife. He is rewarded points for each successful delivery and bonus points if he slings it into the mailbox. Each failed delivery leads to another cancelled subscription which not only affects his point total but the company’s bottom line.

The game captures the plight of the laborer.

The game is extremely unforgiving — just like the market! Everything will cause you to wreck and lose a precious life. The spatial factor is also distorted; several times when riding, you will wreck when you weren’t close to something. Unlike most games of the sort that want you to build up a little bit of momentum in the early levels, Paperboy is frustrating right out of the gate.

You only have three lives with no way to earn more. This isn’t surprising given that the paper boy is a contracted employee who receives a 1099 and is not eligible for benefits. Having no safety net would give most existential dread, but adding in the additional perils of unfairly compensated labor is almost too much to bear.

There is some charm in the ridiculousness of the neighborhood. You never quite know what to expect. You just can’t enjoy it: this street is a certified warzone and you’ll be too busy dodging for cover.

I remember playing some version of paperboy on my Sega Game Gear back in the early 90s. While slightly fascinated with the idea of earning money, I was much more into doing whatever I wanted without having to answer to the man.

Unfortunately, times change. With meager scraps of free time, I’d prefer spending it with something more entertaining. Slightly grazing a wooden fence that irreversibly wrecks my entire career is not my idea of a good time.

I’d rather earn money by filling out online surveys instead of playing this game.