The Hidden Gem of the PS1.

AND NO. IT’S NOT A ZELDA CLONE!

Okay, maybe it is kind of a Zelda Clone. There are bombs, arrows, gloves that allow you to pick up boulders, and something called a “life vessel” that is nothing more than a heart piece. It’s easy to to confuse Inoa, the village in Alundra, with Kakariko or mistake the open world with the fields of Hyrule. However, what the game does within this framework is wholly unique…

… and hard as holy hell! This is quite possibly one of the hardest games I have ever played. Even considering this as something akin to Zelda is a sin after you experience the beatdown of the perfection this game requires. The game’s only downfall is how much it expects of you. The satisfaction of solving a hard and difficult puzzle is quickly extinguished when you realize that it’s only been replaced with an even harder challenge which is followed by another — it’s turtles all the way down.

The grind is worth it, though. Alundra has impeccable world building. Its mature themes are nestled in a world chocked full of unique of experiences. You’ll want to explore and talk to everything as it captures the spirit of adventure so well.

Alundra is on his way to Inoa via ship. He keeps having dreams of the villagers there where he’s told that only he can free them from the evil Melzas, His ship wrecks, and he ends up unconscious on the beach. Jess, a villager from Inoa, takes him in and nurses him back to health.

Once revived, Alundra learns that people in the village are suffering from nightmares. With his dream walking ability, Alundra is able to enter the subconscious of anyone sleeping and free them of the demons within. Melzas learns of being thwarted and a battle for the souls of the villagers begin.

Most won’t make it out alive.

While the basis might be Zelda: A Link to the Past, there is so much here that is unique in both storytelling and gameplay.

Alundra’s biggest pull is the vitality of the main village Inoa. Within it, you have a vibrant community at their wits end because of an evil god. The narrative device of navigating their nightmares adds punctuation to all the characters: here you intimately discover the evil within that Melza uses to preys on them.

Take for instance this sequence with Meia. She comes to the village halfway through your quest and is also a dreamwalker capable of entering people’s nightmares. So far, it’s been hard to tell if she is friend or foe and is rather antagonistic to Alundra. Entering her subconscious, we are treated to everything Alundra has to offer: story telling, puzzles, platforming.

When we first enter, we see that Meia is currently a child in this dream. She challenges us to a game of hide and seek. 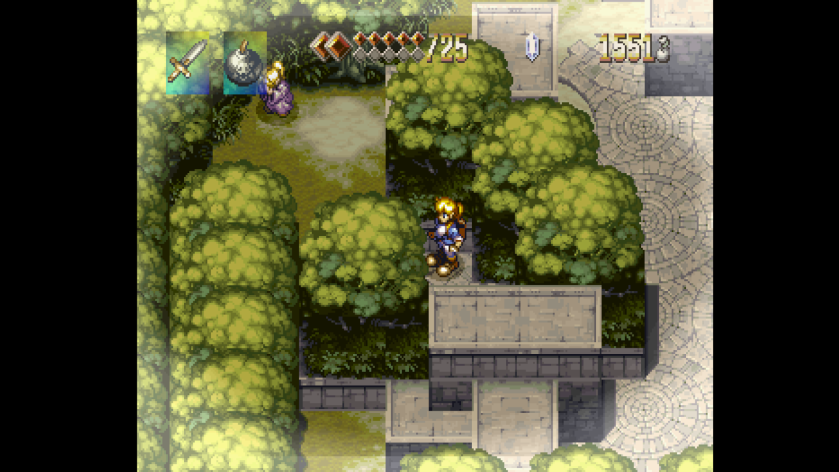 Each time we find her, a door is opened up to something she’s hidden deep inside, solving puzzles involving stacking barrels, setting fire to bramble, and completing tricky jumps. Once done, we are able to reach a statue where she has locked away a memory. 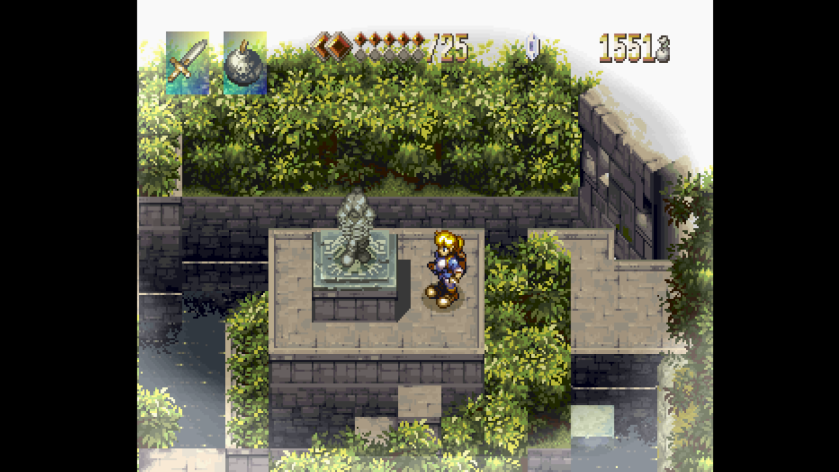 Destroying the statue reveals the history of Meia as she relives her experiences. Her mother became religiously devout after he father died, but eventually recanted her faith and was killed by being burned at the stake. From there, we get to see Meia grow as her own person and what made her who she is.

This interplay between all of the unique elements of Alundra is what makes this game so special. It created a narrative devices that fits its gameplay which gives us an experience that would be hard to find anywhere else.

Sing it with me now: UGH!

While only a cartoon depiction of violence, the themes in Alundra are rather weighty. The core of the game is an existential crisis. Everyone has lost the ability to create due to Melzas seeping into their dreams. What is the point of living if you can’t build anything?

The villagers run the gamut from highly functioning to completely maladjusted. One household has an alcoholic father and a psychotic daughter. Attempting to enter her dream leads to this clinical observation: 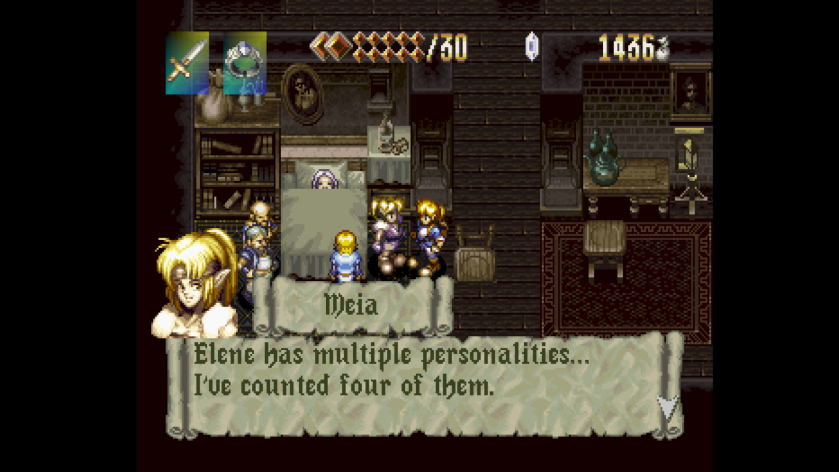 This leads to having to resolve the four separate people within her consciousness to save her from Melzas. Another unique integration of Alundra’s game mechanics and narration tools.

The localization is also stellar. The development team was a quirky bunch and isn’t afraid to have some odd ball characters.

Look Before You Leap.

This game is a mixture of hack and slash, puzzles, and platforming. The platforming is what stands out the most as all dungeons require an intricate series of jumps that must be meticulously timed. Take for instance the victory captured in this following picture:

Getting that life vessel was no easy task. It required jumping on four logs that floated in different directions and different speeds. Needing to catapult from the very end of each log, you couldn’t dilly because of the running stream pushing them apart. A misstep lands you in the water where your only choice is to swim back to the beginning ledge and try again.

If only this kind of accuracy was regulated to the special items.

Another fond memory was having to stay on a rolling cannon ball till the end of a hallway to reach a pillar to open up the next room. The trick: alternating between said ball and ledges to dodge floating spikes. An added layer was that you had to start the sequence just right otherwise the last jump left you in a lose-lose position (getting knocked off the ball no matter what you did).

The difficult jumps integrated perfectly with the puzzles.

In the picture above, you have to pick up a rock and jump between wooden platforms without ending up in the deep water (otherwise you’ll drop your heavy ass rock – duh). Weaving through, there is a lighter shade in the top right corner signifying shallow water that’s safe to traverse. At the end of the crates, you are able to throw the rock to create a higher perch to then cross the abyss to reach a treasure chest.

If there is a weakness, it would be the shear difficulty of these puzzles and the wasted time due to failures. Every miscalculated jump usually resigns you to starting over by making a long trek back to the beginning. These seconds add up as you’ll be doing a high reps of attempts, particularly for the more dastardly puzzles.

The game also never lets up. You will have just figured out the hardest puzzle of your life firing every available neuron in your frontal cortex only to be confronted with MORE puzzles and MORE difficult jumps. You aren’t even safe once you defeat a dungeon. The story, while good, isn’t spaced evenly; there are times where one dungeon leads automatically to another one.

This made me exhausted unlike any other game I could recall (maybe Adventures of Lolo? It left me with a similar feeling of the brain squiggles). However, the game has this inexorable momentum that keeps you going. The open world is an easy respite from the dungeons as exploring the countryside leads to more chests and items to help you with your journey. The satisfaction of clearing a dungeon is a sincere one leaving you cheesily celebrating with your protagonist. 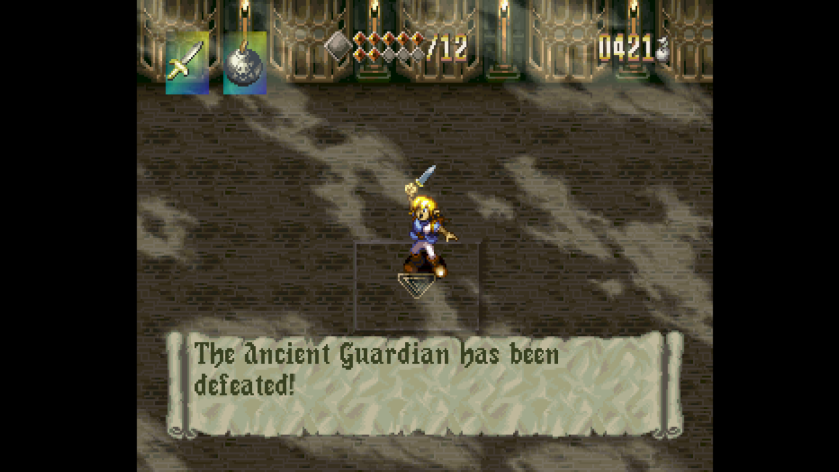 A freakin’ fantastic gem for the playstation 1.