A Game Nietzsche would be proud to play. 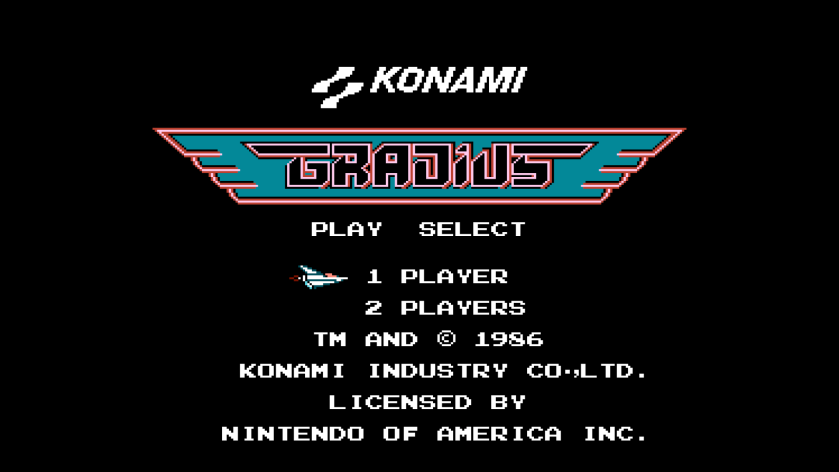 Few things can suck away your spirit to live like an opaque Nihilistic quote or a game designed to steal your pocket change. If I had to choose between reading Thus Spoke Zarathustra or playing Gradius for a day,  I’m not sure which I would choose.

Gradius is more worthy as a portal through time than a game. It harkens back to a day where video games were enjoyed in the public sphere, not in the private seclusion of your own home. These big boxes the size of caskets were tucked away in every nook and cranny and were only momentary diversions while waiting for a pizza or friend. They were not meant to be prolonged and protracted affairs.

This arcade game ported to the NES is no different. Death comes early and often, an obvious ploy to guzzle more quarters. The difficulty ramps to obscene heights. What’s scary is how quickly the dial gets turned up: getting through stage 1 is somewhat of an achievement. As your ship explodes from an array of stray laser fire that dots the screen in a potpourri of projectiles, you will be asking yourself….

Since most cartridges couldn’t even fit the data found in this blog post on their circuit board, the manual has to do most of the explaining:

Who knows what that’s all about. You’ll just end up dying.

To live is to suffer, to survive is to find some meaning in the suffering.

Gradius is your typical space shooter from the 80s. While initially everything is manageable, it will quickly get out of hand as every pixel of black space is filled with lasers, missiles, projectiles, rocks, asteroids, forcefields, enemy spacecraft, and more.

I’ve always appreciated the power up aspect of these games. A ship red in hue contains a  beacon. Securing this allows you to move up the hierarchy of possible power ups. You can either wait to stack them to get the best power ups available (defense shields or dopplegangers that imitate your attacks) or spend them right away for lesser upgrades (increased speed or air-to-surface missiles). This almost leads to some strategy as in theory you are forced to decide between quick and light rewards now or risking a long-term investment for something that really moves the needle.

Either way, you are going to die.

When you stare into the abyss the abyss stares back at you.

There is an old phenomenon in games like this: you will randomly have bursts of insight where you reach a new apex then immediately return to futile attempts where you barely get anywhere. It’s one of the most frustrating experiences from retro games. Nothing you do seems to coalesce into something reliable. Stages that should no longer present problems return as impenetrable wall.

He who has a why to live can bear almost any how.

I guess I did not have a why.