Everything is a Struggle.

I’ve never seen a game so intentionally trip itself up. 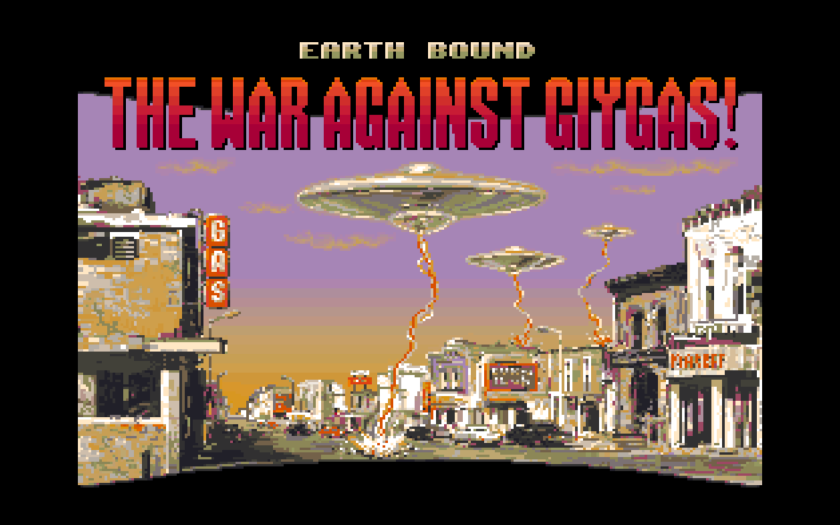 We’ve all seen the meme where the person puts a stick in their own bicycle spoke which causes an accident as the person lays on the ground feigning for attention as if the universe is out to get them.

In the world of 1995 gaming, game developers had caught on to a few things:

Everything from inventory, battles, saving, and money (ESPECIALLY MONEY) is made more difficulty than necessary. Shame on whoever made this game: it would be forgivable in the late 80s but inexcusable for something that came out a year before the N64. It’s reason for being so popular? A group of rabid fans that appeared years after its release.

A meteor lands in Ness’s neighborhood and he checks it out. He needs to capture the sounds of 8 locations in Earth to unlock something another to defeat Giygas or whatever.

If the trolls from a subreddit made a game in the mid 90s, it would probably be Earthbound. It’s all about irreverence, mocking, and pop-culture references. It’s the counter-culture entry in the SNES catalog. While quirky and fun, who gives a shit when the game is worse than running errands.

Here’s my favorite WTF game mechanic. I understand stopping at an ATM was a very 90s thing to do, but no one actually liked DOING it. In Earthbound, this tiresome task takes on a center role. Before you purchase that  14 dollar hamburger, you have to hike across town to withdraw it from your free checking account.

As much as I miss having to go to the bank to cash my check, I kind of like having more time in my life to do things I enjoy, like playing piece of crap video games like this.

Don’t worry, it’s not only money that’s screwed up. The battle system operates on a razor thin margin. Nothing has truly made me feel how indifferent the universe is to our well-being than battle encounters in Earthbound.

Since the dodge rate is so high for all parties, it only takes a little bit of misfortune to completely devastate your team. In the beginning, your party only consists of Ness. If he misses three or four hits in a row (which happens quite frequently), you are toast. To counter this, you should be able to use the game’s version of MP to heal yourself.

This is how the it all comes together to screw you in every way possible.

When you die, you lose all your MP. To restore it, you have to go to a hotel and sleep. The problem: you need money for a hotel. That means you have to go the ATM and withdraw money since you don’t keep it on you. Then, you have to travel to the hotel and actually sleep. Afterwards, you can return to the field, but since the encounters are thin margins of victory, all of this could be for naught.

This game is known for its quirky and fun dialogue. Hey, no false advertisement there — some of the lines are hilarious. The problem is that is such a small slice of your time. Most of the game is wasted time doing aforementioned monotonous tasks that could have been modified to save hours.

I struggle with when to cut the cord on video games. Some might say I only played the game through the first two towns, how could I even write a review? What’ I’d say in return is that as I grow older, my time is very protective. This is my first day off in 19 (nineteen!) days. Why struggle with anymore bullshit than I have to?

While The Angry Video Game Nerd overall liked the game, he gives plenty of space to the plethora of problems. I think I made the right choice — going any further would have only made me angry.

If you’d like to experience how it was to run errands before smartphone technology, I have the game or you.

Leave a Reply to Casual But Smart Cancel reply