Personal hygiene is important but so is making sure the door is locked and barred.

If this movie made me paranoid in 2019, I bet this made folks have schizoprhenic-like breakdowns in 1960.

An early (or perhaps earliest?) example of the slasher genre, Pscyho is still unsettling. Like any good Hitchcock film, there are many layers to enjoy: an extraordinary crime by a normal, everyday secretary; the perturbed hotel owner; the unseen “mother;” the unraveling of two mysteries by a private detective.

This is what makes the film still good today. While the ending is a bit tired, there are so many things going on that you want resolved. The gore could never match today’s standards, but the story telling still does.

Marion Crane, a real estate secretary, steals $40,000 dollars in cash from a client purchasing a property. Fleeing to California so she can hopefully marry her boyfriend, she spends the night at Bates Hotel. Completely deserted due to the new highway being built elsewhere, Marion is the only occupant.

Norman Bates, the lonely and awkward hotel manager, convinces Marion to have dinner with him. After their conversation, she starts to have second thoughts about her crazy plan and decides to turn herself in and return the cash tomorrow. She decides to enjoy a shower before retiring to bed when then things go… haywire. 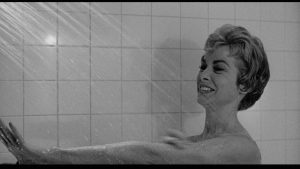 How can a movie that uses what would now be considered nonchalant horror transcend it?

The ending certainly doesn’t help: the idea of a “psycho,” or split-personality, no longer holds a unique place in our minds. If anything, it’s a tired bit of narration. I didn’t even care, though, since the journey was so interesting.

I consider Hitchcock to be the ultimate people watcher. His characters seem more alive than other films due to them actually being complex and complicated. Even the archetypal characters, like the hard-nosed P.I. in this film, don’t seem stereotypical as they have extra layers that make them have more pop than just a prop.

Take for instance Marion. We are introduced to her in the middle of a day-time tryst with her boyfriend. She’s a modern woman doing modern woman things — probably shocking enough for a 1960 audience. When we see her in the traditional setting as secretary, we know she just isn’t some regular ol’ administrative assistant. This doesn’t prepare us though when we see her steal 40k.

While the motives for the theft are inferred (a wedding with her aforementioned lover) it’s hard to wrap around our heads exactly where she is going. The movie meanders just like Marion does, winding down roads and haphazardly trying to cover her tracks.

We get the feeling that Marion is proud to have proven herself capable. But, this proud swelling of fulfilling a devious act is unable to live up to her conscious. The adrenaline begins to fade and the consequences of her actions begin to set in.

Here, Hitchock has captured one of the most relatable human conditions. We all know we are capable of evil, but we feel like it is a part of another world — not ourselves. When we commit some atrocity, small or larger, there is a sense of immense power. It shows us we are capable of life altering decisions and living outside of the norm. For Marion, the basic secretary became an immensely wealthy thief in seconds.

This cannot survive what normally comes next: the bone-crushing guilt and weight of our decisions. Instead of basking in our power to bend the world to our will, we realize we didn’t use our powers for the greater good. We then begin to wallow in our evident weakness instead, berating ourselves for giving in to such a stupid temptation.

Unless you are Norman Bates, of course. 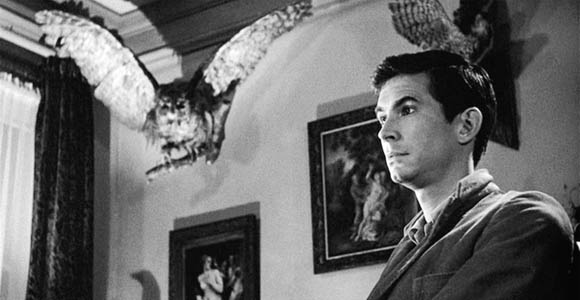 Which is where Hitchock does another quick one with juxtaposition. Where we understand Marion, we consider Norman a monster. He’s the otherworldly representation of evil in the flesh. He doesn’t follow the aforementioned pattern (pride then guilt), but some other kind of algorithm completely foreign to us. It’s a display of two very different types of evil, and how it plays with our intuitions and sympathies.

It’s these interesting dynamics that keep the film going even though some other parts might be a bit stale.

Except that shower scene. It still hasn’t left me.

Lock the doors and settle down for a classic slasher thriller.