The Jokes On Us.

People proudly wear a masochistic badge of honor when they successfully complete this book. Unfortunately, I will not be eligible. 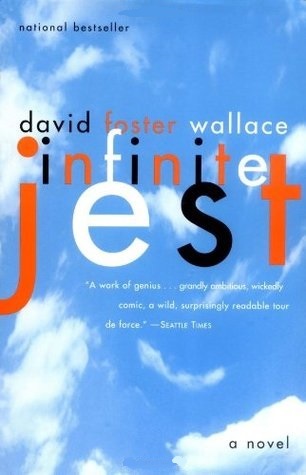 I have some bad news for all of you: one day, your body will begin to fail and you will reflect on how you spent your time. All the day-to-day trifling matters that soaked up our energy will be revisited with regret as this new found perspective will rightfully quarantine them as meaningless distractions. The things that made our spirits soar, people we knew, things we felt, the experience of life, will come gushing forth in a bittersweet nostalgia.

This book was destined to be a trifling matter, and I refuse to spend anymore time with this meaningless distraction. If reading is permissible in an infinite afterlife, Infinite Jest still doesn’t make the list.

I got cold feet early, about 100 pages in. I was confused, and outside of maybe four or five paragraphs, there was no story or shape. I did what any responsible person with multiple entertainment options would do — go to the internet and figure out what the hell is going on.

Goodreads was not a place of solace but rather further demoralization: it only takes 400 pages to start getting into the plot, and since it’s post-modernism, there really wasn’t too much plot or character development anyways within the 1100 pages. Of course, people loved it.

Every review had a self-congratulatory sentence on how they finished it. This was perhaps the oddest sell I’ve seen. People would purport all the negative aspects of the book and how they overcame them with an iron will, a Herculean event to be celebrated, and then talk about how good the book was. “This is the reading achievement of my life due to none of this making any sense,” they seem to be saying, “but wasn’t it just brilliant how nothing made sense?”

I made a deal with myself. I had one week before I moved when I would need to return the book anyways. I decided to read as much as I could stomach before giving up. Another 200 pages in and the commentaries are spot-on (except where they have complete admiration for the book). Still no plot to be found; I’m probably another couple hundred pages away from that. Not to mention the other warnings from reviewers that came shining through.

Everyone Talks the Same.

There are a group of high school athletes that get a fair amount of word count. Here is one quote form a pre-teen boy:

“It’d be like a pleasant fatigue if I could just go up after dinner and honker on down with the mind in neutral and watch something uncomplex.”

They talk like 30-year-old white men. In other words, they all talk like David Foster Wallace. And this isn’t unique to just the adolescent boys — it’s the drug addicts, medical staff, rehab specialists, college administration, undercover agents. Anyone and everyone talks with the same cantor and deluge of vocabulary.

There is one character where he tries ebonics, but it is done so badly that it feels in poor taste. Literally cringe worthy.

Why do elite purveyors of literary goods always fall in love with the most baseless gimmicks as long as it’s wrapped intellectual snobbery? These people wouldn’t be caught dead with a a kitsch western no matter how good it was, but put in bunch of endnotes with expansive vocabulary and damn if you don’t have an army of academicians kowtowing for your attention.

Not only is the book bloated with some scenes that run pages without a paragraph indent (many people who read this book admit to skipping pages and not missing out on anything), you then have to stop and go to the back of the book for each of the 388 end notes. These end notes occasionally come with their own footnotes. Sometimes, they are possible important story pieces. Other times, it’s information you could have lived without.

Adding this start and stop aspect to a book that already starts and stops makes reading it like slamming on a gas pedal when a car is stuck in neutral. You are doing everything possible to get going, but the car never goes anywhere.

The word post-modern gets thrown around quite often, and everyone has their own definition of what it is (which is kind of post-modern in itself). While I like the idea of challenging what we think is reality and the relationships we take on with art (for instance, the role of author, reader, and what it means to be a fiction novel), I think it is easy to write a bunch of opaque crap under the moniker of post-modern as the ultimate aegis.

It puts the onus on the reader. If you didn’t get the book, then you were unable to break the chains of your preconceptions to weather the storm of this heightened intellectual endeavor. This genre has the perfect epistemological get out of jail free card. Anything you try and criticize you have to make concrete, and since the logical underpinning is everything is subjective and nothing can be concrete, it’s like punching water: the amorphous story can take blow after blow and never be harmed.

The story, a convoluted mess that doesn’t get started for 400 pages because of self-indulgent discursion to show off high-level vocab using the same voice for every character, isn’t his fault, it’s yours!

You can’t have it both ways: if people are so happy to share how hard it was to finish and need to be congratulated on it, you then can’t turn around and say how good it was.