Too Much To Sift Through.

Even for a philhellene, the copious list of places long gone became too much. 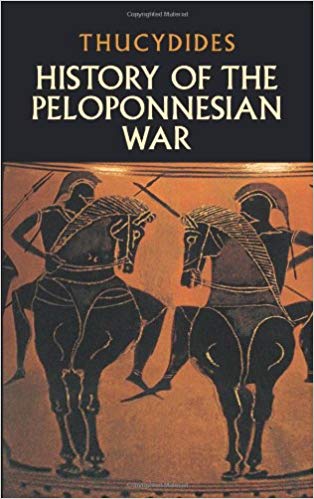 During the last summer off for the rest of my working life, I consumed about thirty books, more than half of which were about Ancient Greece. Just like previous descendants of western civilization, I became enamored with the mythology, culture, and philosophy from the peninsula that changed everything. These books were mostly interpretations and commentaries, so reading the actual source code was quite the change.

Within the first chapter, it is clear to see why this book is so important. Thucydides leads with several big ideas, the most important one being that history can actually be accounted for and objective. The rest of the book is his personal attempt at doing this. I don’t care about whether he actually succeeded — it’s more his aim and scope that I applaud.

The big ideas stop early, however, and the book is mostly a long list of people and places long gone from existence. Running to Wikipedia every other sentence soon grows tiresome. Past his bold opening proclamations, historical accounts based on his work narrate a much more focused and interesting story.

Thucydides was an Athenian. He was a general for the army but was exiled for a failed campaign. During this time, he took advantage of being able to move freely about Greece and began writing in real time about the thirty year war (431-404BCE) between the Peloponnesian League (Sparta and allies) and the Delian League (Athens and allies).

During the Greco-Persian Wars (499-449BCE), Sparta and Athens worked together to stave off invasion from the Persian empires. Afterwards, both greek city-states began to build their own power and influence through the Mediterranean. Though probably a simplification, Sparta and Athens were very different culturally: Sparta, a land-based, warrior-class society vs. the sea-faring and culture focused Athenians.

While the two city-states had a truce, Athens began to bend the rules of the treaty. This, along with the quick ascent of the Delian League led by Athens, lead to the war which Thucydides described as unavoidable:

“It was the rise of Athens and the fear that this inspired in Sparta that made war inevitable.”

This is now referred to as the Thucydides’ Trap: a raising power will inevitable come in conflict with an established power because of conflict of interests.

There are some big ideas found within, but it’s hard to read intently due to its form.

Too Many Names & Places.

Here is a random passage from The History of the Peloponnesian War:

“Himera was founded from Zancle by Euclides, Simus, and Sacon, most of those who went to the colony being Chalcidians; though they were joined by some exiles from Syracuse, defeated in a civil war, called the Myletidae. The language was a mixture of Chalcidian and Doric, but the institutions which prevailed were the Chalcidian. Acrae and Casmenae were founded by the Syracusans; Acrae seventy years after Syracuse, Casmenae nearly twenty after Acrae. Camarina was first founded by the Syracusans, close upon a hundred and thirty-five years after the building of Syracuse; its founders being Daxon and Menecolus. But the Camarinaeans being expelled by arms by the Syracusans for having revolted, Hippocrates, tyrant of Gela, some time later receiving their land in ransom for some Syracusan prisoners, resettled Camarina, himself acting as its founder. Lastly, it was again depopulated by Gelo, and settled once more for the third time by the Geloans.”

I kept a reference sheet next to me whenever I read this book. With each new name, place, person, culture, or city, I ran to Wikipedia, identified it on a map, and updated my cheat sheet. It was endless, and there was no way to keep up.

The great thing about the modern books that retell Thucydides’s history is that it funnels the most important details to you. I am a big believer in need to know, nice to know, and nuts to know, and I couldn’t help but feel the majority of the content was nuts to know. Later historians also have the benefit of time; they know which cultures continued to existed, so they know which parts to highlight.

Like most ancient civilizations, their understanding of history and place within the universe was built upon some mythological story of their beginnings. For Ancient Greece, this was Homer’s Iliad and Odyssey. Thucydides doubted how truthful one could trust someone who’s purpose was to tell stories and entertain:

“…if we can here also accept the testimony of Homer’s poems, in which, without allowing for the exaggeration which a poet would feel himself licensed to employ, we can see that it was far from equalling ours.”

What’s interesting about this viewpoint is how Thucydides uses Homer to contrast himself:

“I have written my work, not as an essay which is to win the applause of the moment, but as a possession for all time.”

Thucydides viewed his project as objective and a true capture of what happened. He is meticulous in detail and tells each year from the viewpoint of Summer and Winter for time-keeping purposes. There is a sense of true history here: no acts of gods and a logical timeline.

The problem is there are plenty of things to doubt. There are several long speeches found within, speeches that he could not have been present for. Thus, he must have heard them from other people playing a big game of telephone. He admits to as much within the first chapter:

“…it was in all cases difficult to carry them word for word in one’s memory, so my habit has been to make the speakers say what was in my opinion demanded of them by the various occasions, of course adhering as closely as possible to the general sense of what they really said.”

So much for the objective historian.

With what’s dubbed the first scientific historical account, we already see the problem when it comes to reporting world events. I applaud Thucydides’ transparency; he is honest and open about how he had to collect this information. However, I find it interesting that the very arguments you can use against scientific history (subjectivity, access to information, biases) was there from the very beginning.

A plague ravaged Athens early in the conflict, and Thucydides decided to be very descriptive in its symptoms and course because:

I shall simply set down its nature, and explain the symptoms by which perhaps it may be recognized by the student, if it should ever break out again.

How neat that he thought that he was a part of history himself, and that it was worth sharing. In some ways, this is also the start of modern medicine.

Then there was some critical thinking of appraising civilizations:

Suppose the city of Sparta to be deserted, and nothing left but the temples and the ground-plan, distant ages would be very unwilling to believe that the power of the Lacedaemonians was at all equal to their fame. And yet they own two-fifths of the Peloponnesus, and are acknowledged leaders of the whole, as well as of numerous allies in the rest of Hellas.

These thoughts are what makes Thucydides so highly-esteemed.

This book deserves five stars for historical significance and some seminal ideas, but only gets two for a modern reading.