Awesome atmosphere with continued perfection of the sand-box RPG genre.

I took a break from most video games through college; I made the subconscious decision that drinking and dancing were more important to me. Sure, I replayed a few classics and did some Madden with the dorm mates, but I didn’t have a PS3 or Xbox 360. I missed out out on anything that came out between 2006-2010.

Then there was Chris. My first roommate post-matriculation, he introduced me to everything I missed. Fallout 3 was the first game I decided to go for, and with his dire warning (“it’s going to take up a lot of your time — a lot”), I set out into the wastelands. A work week and a half of time later, I returned a changed man. 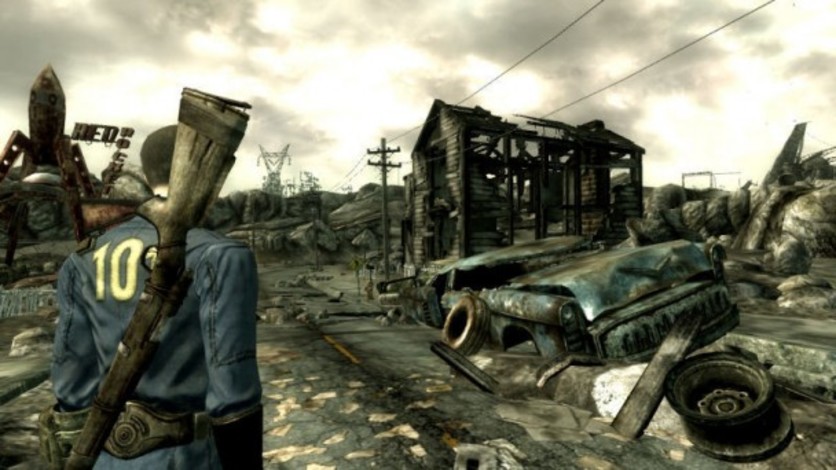 America was eradicated by nuclear destruction and only vestigial remnants still exist of civilization. A company set up vaults that would protect the human race in case of emergency, and this is how you were born raised: underground in a vault with your father James. He leaves when you are 19 creating an uproar — no one is supposed to leave the vault. The Overseer (the one in charge of the vault operations) begins to hunt people down to reign in the chaos, but with the help of his daughter, you escape into the Washington D.C. wastelands.

What follows is an adventure to find your Dad who is working on a project to heal all of humanity. Along the way, you’ll learn what is left of civilization and forge your own ethics, either for good or for bad.

Fallout 3 was a new type of game called a “sandbox” RPG. A sandbox game is described as:

… a style of game in which minimal character limitations are placed on the gamer, allowing the gamer to roam and change a virtual world at will. In contrast to a progression-style game, a sandbox game emphasizes roaming and allows a gamer to select tasks. (Technopedia)

This was the innovation of the late 2000s that Bethesda perfected. The world is crammed with as many interactions as possible, and then you the user are allowed to choose what you decide to do or ignore. It’s possible to spend 100 hours in this game and ignore the main storyline — something unimaginable on games just adjacent to Elder Scrolls and Fallout.

This immense amount of choice was overwhelming, but within a few hours, you see what makes it so beautiful: it’s an experience tailored just for you and their is the weight of consequence to your decisions. 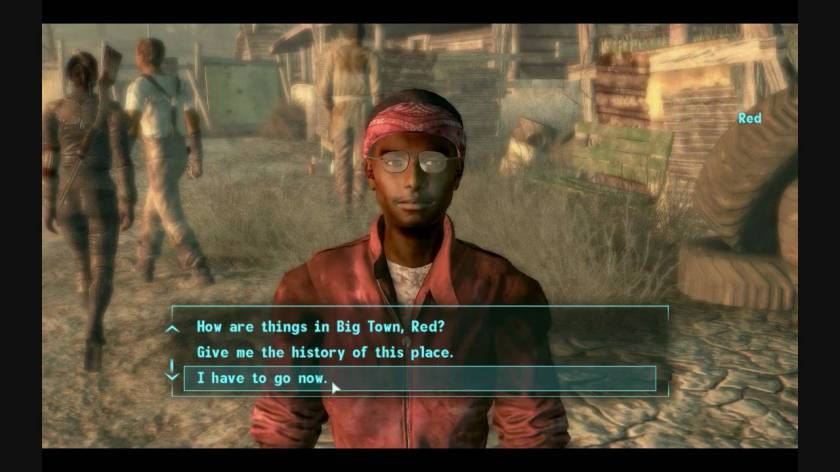 Your Own Version of Reality.

If you stack all of these on one another, you get a situation where the permutations of possible play throughs is scaling to infinity.

I decided to enslave Big Red from Big Town to earn some easy experience and test the boundaries of my morality. I arrived to find the entire town decimated: they were under constant threat of Super Mutant attack and obviously succumbed it. Not only was there no chance to enslave Big Red, but how many other quests were unrealized due to this event?

Each game has moments like this where from your own choices or random events there are pathways forever closed to you. This is a big deal. Just saying you are playing XYZ no longer conveys a sense of shared experience with another gamer as they may have seen a completely different set of events! Also, the game is so expansive, many events hidden within the game will forever be unknown to you.

Fallout 3 is essentially one big trolley problem of philosophy ethics. It puts you in positions where you have multiple competing values with a hint of unknown. As previous discussed, your actions carry weight and will change the course of your entire game, so these crossroads are usually heavy times.

In one play through, I went from a slaver, to freeing kids who were slaves, to clearing out the entire slaving camp to free everyone. I discovered that I’m not really good at playing the ruthless bad guy and would offset any evil decision with a good one. The evil actions really stuck with me: I felt like I was truly a bad actor even with being just a video game and would adjust my behavior accordingly.

Though I didn’t quantify this, I think the game mostly rewards people for being good actors with reciprocity from other factions. This requires someone who wants to be a truly evil character to have immense fortitude to put up with additional problems that their behavior creates.

Maybe Fallout 3 is closer to reality than it first appears?

Though this doesn’t happen here, I have a concern about this direction in video games. With these open environment games, the creators can no longer control the narrative or the story. The popularity of RPGs on the SNES and PS1 go back to their ability to tell a wonderful story with characters you care about. Described as Japanese RPGs for their country of origin, it was akin to an interactive book.

Fallout 3 avoided this conundrum by adding such good ancillary vignettes as each quest is a unique story within the framework post-apocalyptic America. They even use “hidden stories” quite frequently; as you explore the wastelands, you will pick up trail radio transmissions from people’s hideouts. These folks are inevitable dead, but you get to pick up the pieces of what happened to them with fragments of clues and notes left behind.

This coalesced into something meaningful, but I’m not sure it’s always going to be that way in the future. It’s way easier to create algorithms for random events rather than a meticulously-created plot full of characters and moments that move us. Just like 2010, I am behind in video game history, so I have yet to see if this is something that has come to fruition, but I am concerned about the dearth of story telling and how it might be replaced with this format.

Use some of your paid time off and get to it.