The wait through the first 3/5ths is worth the firecracker of an ending.

American Film Institutes Ranking: #45/100
Awards: Nominated for 12 winning four with three of them in the acting categories (a feat only matched by Network).
My Rating:

Things were be-bopping around for a good while, and I started to get worried: this could be a dud. Was this a classic movie just because it dealt with some “risque” themes?

My concerns were ungrounded. When Blanche DuBois started to become unhinged, things become phenomenal. A switch instantly flipped and all the ground work hitherto became immensely signifiant. I was on the very same ride that Blanch had put everyone through, and it was very unsettling when it was time for the ride to end.

Blanche DeBois (Vivien Leigh) has to leave her home in Mississippi ostensibly due to creditors claiming the property. She travels to New Orleans to stay with her sister, Stella Kowalski (Kim Hunter) and her husband Stanley Kowalski (Marlon Brando). Blanche, a debonair, soft-spoken southern lady is immediately at odds with Stanley, the rough-and-tumble, tell-them-like-it is personality.

During a poker game with the boys, Blanche meets one of Stanley’s friends Mitch (Karl Maden). She enters a relationship with him, but leads him on. Stanley has doubts about Blanche and researches her past. He finds out the true reasons why she had to move from Mississippi: sexual relations with a minor, mental instability, a previous prostitute. He tells Mitch this and later exposes Blanche in front of her sister.

Mitch confronts Blanche where she drops all of her pretenses — her southern accent fades, the wrinkles in her face seep through, and her previous mannerisms dissipate. Mitch leaves her in disgust, and she suffers a mental breakdown. The film ends with Blanche being sent to a mental institute, Stanley revealing he’s the cause of it,  and Stella leaving Stanley for good.

The movie is successful in ensnaring the audience with Blanche’s ploy: she isn’t just fooling the other characters in the movie, but us as well. While we might share Stanley’s intuitions that something isn’t right, Stanley is no personality we can rally around. We get stuck in a hodgepodge of two strong-willed characters, and neither of them make much sense in the beginning.

This is why the front end of the movie seems so dithering. It lacks context of the climax of the movie (Blanche being exposed as a fraud), so everything seems unmoored. Once you reach that pivotal moment, everything magically falls into place. Blanche has been dropping an immense amount of lies through the entire film, and once she exposes her true self, you get to reflect on all the moments you were tricked. The throw away lines about her age, awkward descriptions of her situation, and aloofness in relationships all comes to head of importance.

Now that you realize you’ve been fooled, you have some personal investment to figure out the why. The moral of Blanche is that fantasy can only go so far in shielding us from the harshness of reality. After Mitch leaves her, Stanley returns home to see her dressed in a beautiful gown espousing fake scenarios of lovers. She has descended from the elitist socialite to a world of pathetic make believe to buoy her self-esteem.

We realize that Blanche was never confident, and her misdirections were an attempt to get people to respond with approval. This is why she so highly cherishes beauty; she thinks all she has to offer are solutions for carnal desires. In some ways, she is right as she has no job, hobbies, and no world outside the meticulously created facade. Her lack of objectivity about her situation lead her to investing time in a fantasy. 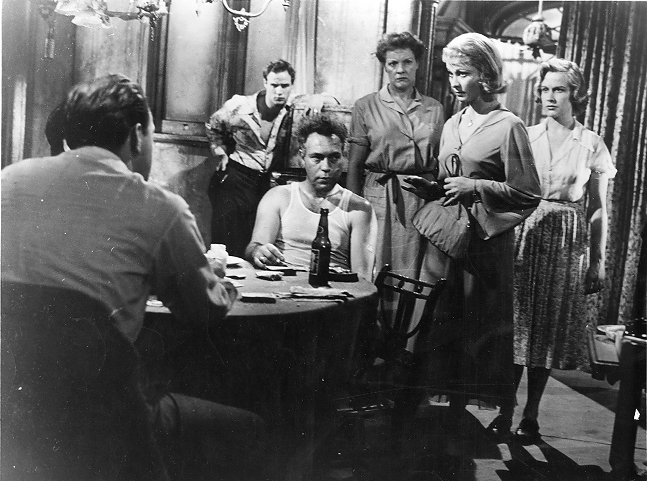 A generic observation about classic films is that their richness is found in the character studies. There is a misconception that old films only have black and white characters that lack depth. While this might be accurate about Westerns, the other parts of the classic film industry have uniquely positioned characters to examine depths within the human experience. These movies just take their time and require some faith by the contemporary viewer.