A movie weak on plot but high on artistic expression leaves me bored.

I find Gene Kelly super talented, but it wasn’t enough to carry this movie.

Winner of Best Picture in 1951, “An American in Paris” is more about the celebration of the arts than a cohesive movie. The plot and characters in this movie start out having much to do with one another, like you would expect. By the end, however, the characters are merely props to be inserted into the next dance number.

Jerry Mulligan (Gene Kelly) is a retired WWII veteran living in Paris trying to make a living as a painter. He lives above a cafe with an inspiring musician, Adam Cook (Oscar Levant). Adam knows the big-shot, French singer Henri Baurel (Georges Guetary) and his girlfriend, Lise Bouiver (Leslie Caron).

One day when Jerry is trying to sell some paintings, an affluent lady named Milo Roberts (Nina Foch) approaches him about buying his paintings and invites him to a party. He arrives to realize he is the only one at said “party” and tries to leave. She doesn’t allow him to and instead suggests going out to a bar. This begins a tangled, love quadrilateral between the four main characters.

Interspersed between the story is a ragtag bunch of show tunes using Gershwin music that culminates in a 17-minute ballet dream sequence. The biggest problem  with the film was the disconnect between the musical numbers and the story. They had very little to do with one another; it was more like a variety show. Watching Gene Kelly do his tap dancing thing was actually entertaining enough on his own, but as the movie continued it becomes more disjointed and pretentious. It ends with the famous 17-minute ballet interpretation of Jerry’s and Lise’s relationship.

This last scene is a hectic mishmash of settings, people, and color. Everyone is moving very quickly, Gene Kelly most of all, and offers some terse emotion to jolt your interest. The sequence has plenty to appreciate. Even the untrained eye is left in awe of such a major production.  The problem is that it’s bloated and pompous. It’s a long trek through peculiar and unimportant lands since none of it matters to the story.

This is always the major flaw of the movie.

Unlike “My Fair Lady”  where the musical content cannot be partitioned from the narrative, this movie takes the complete opposite approach: you could cleave away every musical aspect and not miss out with the story. There are times where it accents the narration, like when Jerry sings to Lise by the river to express his love to her, but it never makes an impact on its own. 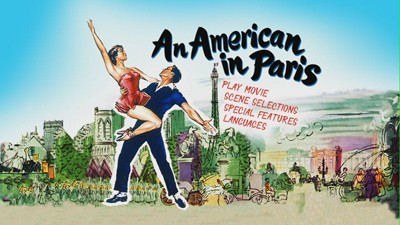 Good for Gene Kelly. He convinced a movie studio to take a risk on a higher art that the mainstream did not appreciate it. The risk was rewarded with Best Picture of the year and produced an uninterrupted ballet sequence that people STILL talk about.

Unfortunately this number, and ultimately this movie, doesn’t have any real meaning to you unless you like the art form.