This movie combines the awe-inspiring nature of the west with mostly inorganic and stale characters leaving me wondering: can setting alone carry a movie?

I sometimes take a peak at other people’s thoughts on a movie before settling down on my own: was there an angle I missed or a piece of lore that impacts how I view the film? Roger Ebert is consistently someone I go to first because of his acerbic wit and clear writing. His review for “The Searchers” is a study in character analysis as he slices and dices the depth of the two main leads, reading far into the director’s intentions and purpose.

I simply disagree with what he comes up with.

Ebert dives deep into the shallow souls of these scantily-detailed characters, projecting life into them that I just cannot see. Where he finds impactful statements and testaments to the director’s hidden or subliminal messages, I see stage props — exception being the main character. This leaves me feeling that the environment was more dynamic than the story and characters: the West is daunting with staggering depth and isolation, while the characters are more true to the stagnant mountains that surround them.

[Spoilers] Ethan Edwards (played by John Wayne) returns home to his brother after participating in the Civil and Mexican Revolutionary War. From the onset, you realize that Ethan is almost a mythical character given how people respond to seeing him. He is also a bit out of place: always separated and rebellious, Ethan seems uncomfortable in the setting of regular frontier life.

One day, a band of Indians capture a bunch of cattle from a neighbor, and Ethan and the rest of the men go to hunt them down. This was all a ploy to draw the fighting men out so the Native Americans could then raid the villages and capture women, which they do to Ethan’s brother’s family. Thus begins a five or so year journey to find one girl (Debbie), as Ethan gladly throws himself into the danger and adventure of the wild west. Martin, an adopted child of the family, agrees to stick with Ethan to hunt down Debbie. Martin is 1/8th Comanche, and with this little bit of information the conflict and character development begins.

The intrigue driving the story forward is whether Ethan is going to kill Debbie upon finding her or let her live; she is now Comanche to Ethan and has broken some sort of white code for impurity. Martin, being part Comanche himself, obviously believes she is worth saving. It is almost a race to find Debbie between the two as it will determine whether she is rescued or killed. 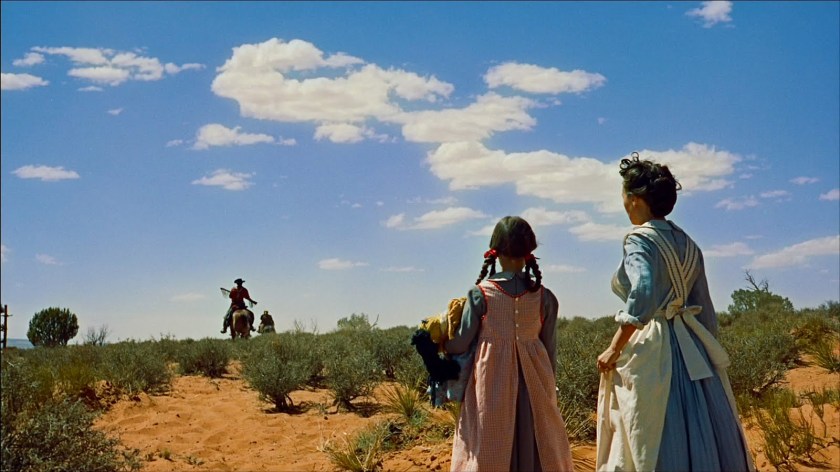 Where this movie gets the most play is about Ethan. The prototypical loner, he rages against the Comanche because that is all he knows how to do after being in two wars. One almost gets the sense that Debbie has very little to do with Ethan’s drive: he is doing it to have a reason to kill and pillage, longing for the adrenaline of taking another man’s life. His relationships to all the characters are shallow at best, mostly interacting with them so he can feed his need to pillage and destroy.

At the end, when Debbie is finally recovered, the most iconic scene from the movie is played: a solitary Ethan, ending the movie like it began, walking away by himself as the door closes again on his sense of purpose.

Ethan and the setting are the reasons to see the movie: he is the only one with any pop amongst an entire cast of rocks. While just a stereotype, his loneliness is presented rather well in the film, and it is intriguing to watch him fulfill this archetype to the very end.

Everyone else is a placeholder.

Everyone reads into how The Searchers is using the ardent racism to be a reflection of how it is no longer noble. Ebert goes as far to say as people in the 50s probably missed the hidden messages of anti-racism because the movie seems to be playing into the racism card so much when people were more prone to delight in their prejudices. The only problem is I missed it too, and I don’t exactly think about Manifest Destiny very often.

All the characters you meet outside of Ethan (the Native Americans, the family, the women, etc.) are only able to provide the sense of setting. Now I very much liked that part — something about those Western vistas with people living out their quotidian responsibilities gave the film an immense sense of isolation. The tiny specks of human life surrounded by a vast nothing very much reinforced Ethan’s character and purpose, but those characters were nothing more than stage props, providing less depth than the mountain ranges that surrounded them.

Maybe I missed the great insight, and with so many famous directors giving “The Searchers” high accolades, it is possible that I missed the point. But, the cinematography, the expansive vistas, and Ethan’s character were more than enough for me to enjoy the film. That final scene is iconic on just its own: its not just the loner who enters and leaves this life alone, but everyone.