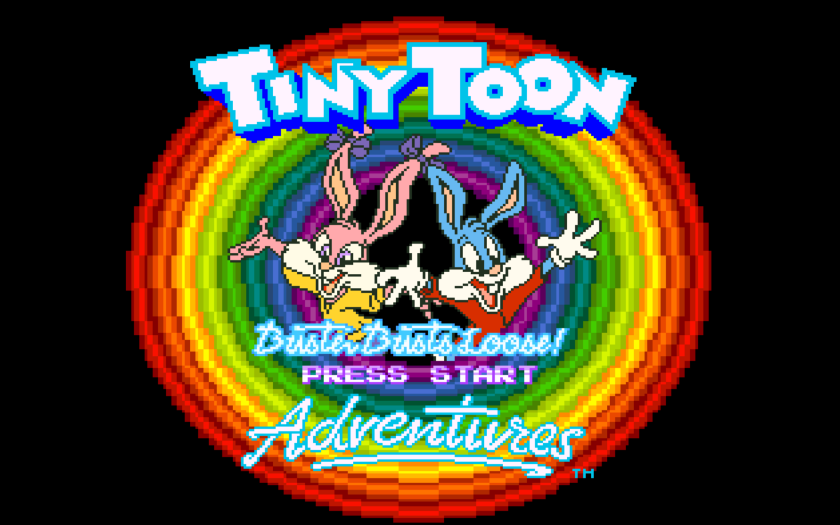 I was a Tiny Toon fan when I was a child; every day after school it was on, and not until I reached middle school did I make the jump to Dragon Ball Z on Toonami. My favorite episode is easily where they danced to old-school songs for a whole episode. Tiny Toons was always weird, popcultured, and cerebral, taking advantage of breaking the fourth wall to interact in a way different than other cartoons at the time.

So I guess no different than today, it is important to monetize anything we enjoy and video games seem to be an easy way to do that.

First the bad: the game is really, really short. So short, that when I got to the final area and boss, every indication that it was the end of the game went over my head because my internal clock just thought it wasn’t time. Pair this with the difficulty of the game (about 90% easy peasy) and you really don’t have a lot of things to experience.

The things in the game are very true to the feel of the cartoon and don’t stray in art design or content. You are going to see the usual cast of characters (all miniature versions of the traditional cartoons) with a variety of mini-games for you to enjoy.  Between each of the stages, you have a selection of games to earn more 1-ups, one of them involving playing a mean game of wall ball with yourself which is my personal favorite. Hell, there is even a football simulator in the middle of the side-scrolling action, so how is that for eclectic tastes?

There is not much to say about this game. It’s specially themed for those who grew up with the cartoon, but it doesn’t stray a whole lot from any other basic side-scroller with the exception of the mini-game buffet. Enjoy the nostalgia folks!