This game might be the foundation for my worst video game memory and source of why I sometimes say “Yipchawww” in social settings.  Let me get the former off my chest, and why I retrospectively still take two stars off the rating.

You didn’t always beat the video game you owned in the 90s. With the lack of save features, it was not unusual to have a stack of games you played, owned, and never beat. This wasn’t always because you got bored with it; some games were just impossible to beat or were variable in their rewards. This meant anytime you go to those ending credits, you did something.

I had just defeated the emperor of the empire, and in my triumphant moment, I had 30 extra lives stockpiled. I couldn’t believe I had gotten to the end of the game with this many extra lives. I was on video game accomplishment high.

Well, the next screen flashes and it isn’t all over yet; I have to escape the death star as it explodes. Unexpected, but no big deal. You have to lay on the speed button, use the L & R buttons to spin to fit through holes, ad use the D-pad to navigate out of the way of objects.

Few things. The flashing of the metalwork as you go through the tunnel is nauseating. The graphics are only strong enough to show you about four levels of depth so things are constantly coming out of the dark but not in a faded manner. Second, you can make about two, maybe three mistakes before you are toast. Third, the tunnel is about two minutes long. Four, the placement and use of the controls have to be pretty darn exact. When dodging platforms that cut the screen in half, you have to press hard enough to dodge the metal, but not too hard or you run into the opposite end of the wall. There is also a pretty wicked rebound effect, so you are always bouncing around in the tunnel.

I ended up burning through all 30 lives. I did beat the game later, but only after I had recovered from having my identify as a “gamer” rattled.

My neurotic memories aside, Star Wars saw a revival in the mid 90s because George Lucas rereleased all of the original movies with “edits:” such as extending random dance scenes and enhanced skeletal remains.

The game is your basic platformer with Star Wars window dressing: finding lightsabers increases your health bar; Luke has an array of Jedi skills; the settings of Tatooine, death star, and outerspace. Some of this is especially well done, as the sound effects are particularly on point and capture the Star Wars universe extremely well.

Other things, not so much: since every stage has to end in a boss fight, many of them are completely made up enemies, but this doesn’t take away from the experience too much. 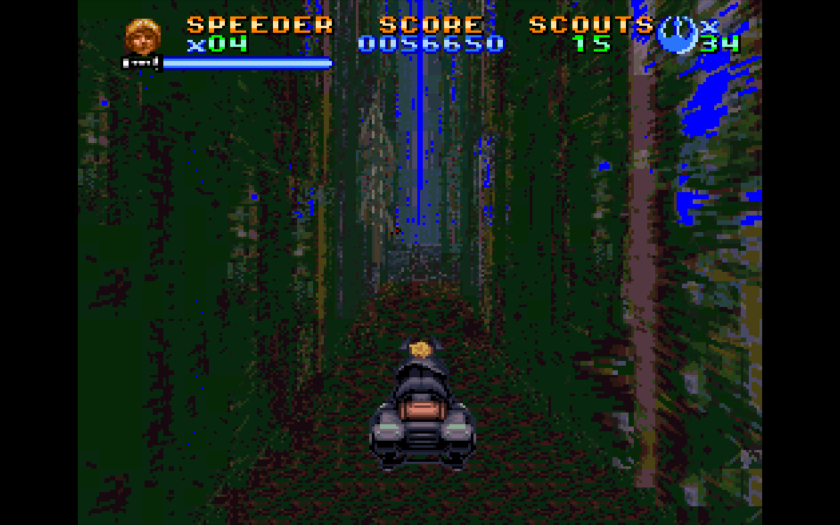 I own all of the Star Wars SNES games, and I find that this is the best one. You get to select the character of your choosing with every stage, allowing for different approaches. Nothing is too ridiculously hard (except you know what) which was always the problems with the earlier installments. Overall, I like what this one brings to the table and enjoyed playing it.